One of my greatest God-given strengths is my ability to contract strange illnesses and then recover from them.  I don’t like the getting-sick-with-weird-stuff part, but it’s nice to have the getting-better part.

The best example of this was the disease I came down with during my final semester of graduate school which was pronounced “The Worst Case of Whatever It Is” by the specialists who saw me.  THEY ACTUALLY STUDIED MY SICKNESS BECAUSE THEY HAD NEVER SEEN IT BEFORE.  My symptoms, which included a shingles-like rash, photophobic headaches, and some of my vital organs coming perilously close to shutting down, were not unlike the symptoms for the West Nile Virus.  However, as I had never left North America, they felt it unlikely that I actually had it.  So how did they treat it?  I haven’t the faintest, as I remember almost none of it because I was too busy being in pain and trying not to scratch myself.  But I got better.

There’s also the example of CIS.  MS isn’t all that weird/strange of an illness.  LOTS of people have it.  But of course, I’ve got CIS, which is less commonly diagnosed than full-blown MS, and so rather than just saying “I have MS,” to which everyone responds “Okay, I know what that means,” I have to explain exactly what CIS is, which really just makes me look like I’m an MS patient in severe denial. 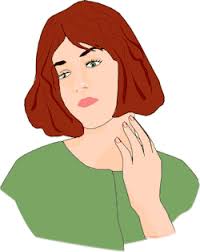 There is no real way to treat it and they don’t know what causes it.  Anyway, I hadn’t had an ST episode since 2006 (and truthfully hadn’t even thought about it since then) until yesterday morning when I turned my head, felt/heard a POP, and was stuck working a 5 hour shift at my retail job with ST symptoms.  Went to the doctor after work, and sure enough the x-rays showed the spasms consistent with what we saw 5 years ago.  He prescribed me some pain meds and a muscle relaxer and I was on my way.

Now, of course, there is a lot more info on ST than there was 5 years ago.  They even have a foundation for it.  But having this, yet another weird neurological thing going on with me, makes me all the more angry with my brain.  I just wish it would stop attacking itself.

This morning, I woke up with plenty of pain in my neck, but certainly less than yesterday.  I was absolutely DYING to work out since I missed yesterday, so I popped in the DVD to start Level 2.  And what did I hear Jillian say not 1 minute into the warmup?  “Neck circles!”  Hell no, Jillian.  No neck circles for me today.

How was Level 2?  Definitely harder than Level 1, but not as crazy as I was expecting.  The abs work was hard because I kept having to put my head on the floor for the cruch-like exercises, which hurt my neck; after the first few moves I just decided not to put my head down all the way between crunches, which actually gave me a tougher ab workout in the end.

I’m getting ready to go run and then I’ll be off to run some errands.  The joy of summer never ends!

Have you ever gotten a weird illness/disorder?  Or am I just special?